Pictured here is the family of Andrew West Lascelle, his wife Mary Harriet Miner, and their seven children. The photo was taken circa 1887 most likely in Dorr (Division of Woodstock City), McHenry County, Illinois. Notice that Andrew is proudly wearing his GAR badge.

Andrew and others from the 14th and 15th Illinois Infantry units were a part of Major General William Tecumseh Sherman’s “March to the Sea” campaign across Georgia in the winter of 1864. Andrew (and several of his Illinois companions) was captured by Confederate soldiers in Acworth, Georgia and taken to the infamous Andersonville Prison on October 4, 1864. While he and a group of his peers were being moved to another prison camp, he and four others of the Illinois Infantry managed to escape on December 11, 1864 near Thomasville, Georgia. They reached the Union Army lines on the Florida Coast on January 2, 1865. 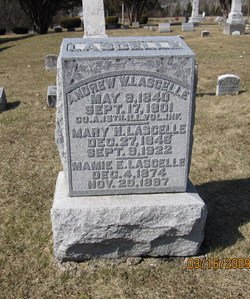