The Medal of Honor

In December 1861, President Abraham Lincoln signed a Congressionally-approved bill (Public Resolution 82) creating “medals of honor,” specifically for enlisted Navy personnel. In July 1862, President Lincoln authorized Army medals. Like the Navy medals, these were to be “presented, in the name of the Congress” to enlisted personnel who “distinguish themselves by their gallantry in action, and other soldier-like qualities” during the Civil War. During the Civil War, there was no time limit between the action and award so many recipients gained Medals of Honor in the years after the war ended.

On March 3, 1863, both services made the decoration permanent. In addition, the Army extended eligibility for the Medal of Honor to officers as well as enlisted personnel. The Navy medal remained available only for enlisted personnel until 1915.

The servicemen below received the Medal of Honor during the Civil War and have ties to the Department of the Columbia. 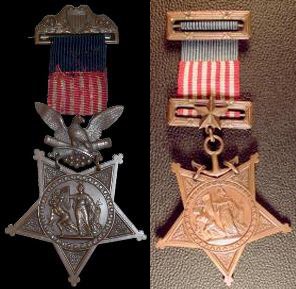 These individuals earned the Army Medal of Honor during the period specified.

These individuals earned the Navy Medal of Honor during the period specified. Their names are followed by their rank and rate, if known, the date of the action and the vessel or unit on which they served.