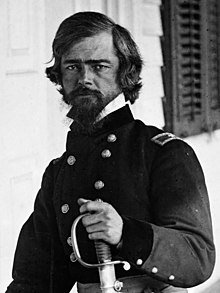 Our camp is named in honor of Isaac Ingalls Stevens, Washington Territory’s first Governor and major general, who was killed in action rallying his former regiment, the 79th New York Infantry at the Battle of Chantilly, Virginia, September 1, 1862.  To learn more about our camp namesake click here.

Individuals attending events hosted by the Sons of Union Veterans of the Civil War, by virtue of their attendance, agree to the usage of their likeness in the Banner, any Camp or Department Newsletter, any SUVCW website and/or on any SUVCW Social Media outlet, promotional brochures, or any other SUVCW material.