Calvin Latham was the son of Travis Latham and Lucinda (Dulin) Latham and  he grew up on family farms in Norwich Township, Franklin County, OH, and  in Concord Township, Delaware County, OH. On October 5, 1858, Calvin Latham was married to Carrie A. Smith in Delaware County, OH, said ceremony having been performed by local justice of the peace F. Kinsdric. On March 28, 1864, Calvin enlisted in the 88th Ohio Volunteer Infantry and was assigned to Company F as a private He served with the 88th OVI until the conclusion of the Civil War and was mustered out with his company on July 3, 1865, at Camp Chase in Columbus, OH.

Following the 1894 death of wife Carrie (Smith) Latham, Calvin Latham was married for a second time to Printha Baker. Following the 1898 death of wife Printha Baker, Calvin Latham was married for a third time on December 24, 1900, to Annie E. Bichard (a.k.a. "Bishard"), said ceremony having been performed by the Rev. Russell B. Pope. Calvin & Annie were married in Annie's hometown of Cambridge, OH, and Calvin spent the remainder of his life there. From 1861 to 1864, Calvin earned a living by clearing ground & cutting cordwood in partnership with another man in Delaware County (By Gene Dulin). 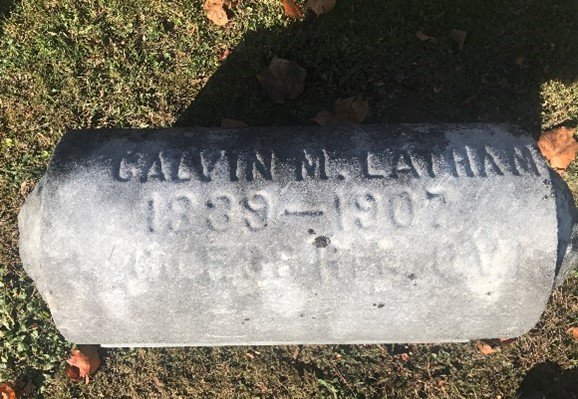