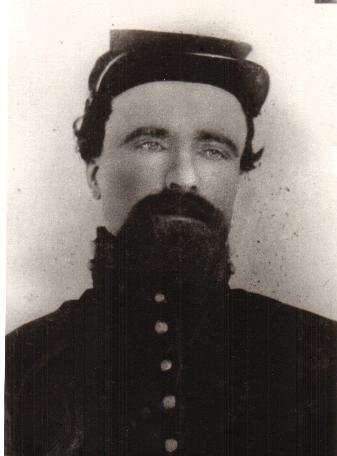 Stephen was born on a farm in Tinglestad, Norway, on August 16, 1830, and came to Muskego, Wisconsin with his family in 1854. He was 24. He worked on a farm there for a couple of years before he traveled with a group of men to Minnesota. As soon as Stephen arrived, he filed a claim for land, 180 acres in Eureka Township, Dakota County.

The land was raw, so Stephen lived with another family according to the 1857 census while he worked to improve his claim. He had good reason to work hard at building a house, clearing land and establishing his farm — he wanted to marry and needed a home for his new bride. Stephen had met Ingeborg Anderson when they were living in Wisconsin, but she did not come to Minnesota until later in 1857. They married in February of 1858 and settled down to farm and raise a family.

Both had family living nearby in Eureka. Stephen’s father and brother had the next farms over from Stephen’s land and Ingeborg’s family was about a mile away. Their first son was born in November of 1858, followed by a daughter born in January of 1860. Another son and daughter were born in 1861 and 1863.

The battles with Confederates may have been far away from their farm, but the Civil War was intruding on the family farm life Stephen and Ingeborg were working at building. Two of Stephen’s brothers were drafted, a third one enlisted, and the farm economy of the area was suffering. Stephen decided to enlist to serve one year in the army. He received a bounty of $100 for his agreement to serve, $33.33 at his enlistment and the balance in two later payments.

This is where the misspelling of Stephen’s last name went down in official records. Military records spell Stephen’s surname “Toreson.” Family records show an “h” to make his name Thoreson. Stephen’s brother, Ole said Stephen dropped the “h” while in the army. Ole mentioned the spelling in the pension deposition he gave for Ingeborg, he did not provide a reason for the change. However, known records where Stephen was required to sign his name show only his mark, “X.” Family stories indicate Stephen had very little education and was likely illiterate his entire life. With Stephen’s inability to read, probably aided by his Norwegian accent, he likely never knew his name was misspelled by the army.

Stephen reported to Fort Snelling on August 26, 1864, leaving behind his pregnant wife and four small children. He was assigned to the Second Minnesota Battery of Light Artillery and went South with a group of recruits. He reached the Battery in September while they were in garrison duty near Chattanooga, Tennessee.

Garrison duty remained the assignment for the Battery for the rest of the war, so Stephen was set to work repairing the fortifications instead of fighting Confederates. The Battery’s captain, William Hotchkiss, was detached from the unit and ended up overseeing artillery at the Battle of Nashville. One gun section from the Second Minnesota Battery started for Nashville, but were turned back and did not participate in the fight.

Family stories tell of Stephen being captured, but military records do not provide any evidence that Stephen was ever held by the Confederacy. His name does not appear in the morning reports as ever being absent from the Battery. He never reported sick and he was never noted by name for any reason in any known official Battery report. His muster sheets indicate he was present throughout the year of service he provided to the Union Army.

At the end of the war, the Battery returned to Fort Snelling where the men received their final pay and settled their accounts with the Army before being discharged on August 16, 1865.

Stephen returned to his farm and family, a family that continued to grow to include eleven children. By 1880, stories of rich lands in the Red River Valley were circulating and several friends from the area had moved there for that better land. Their reports enticed Stephen to head north with his brother and stake a claim near Grafton, Dakota Territory. They built a cabin and began breaking the virgin prairie. Ingeborg and the younger children stayed on their original farm in Dakota County, Minnesota.

The hard labor of breaking new land was too much for 52 year old Stephen. He suffered from a kidney disorder he blamed on his service in the Civil War. After two years in the Red River Valley, he returned to Minnesota and died on, September 22, 1882. He is buried in Highview Cemetery in Dakota County, Minnesota.

When Ingeborg applied for a widow’s pension, she said they had no mortgage on their 180 acres when Stephen died. He left her four horses, seven milk cows, two calves, three hogs, some wheat and oats enough to feed the horses and for seed, but no money. Ingeborg’s son farmed the land and gave her a portion of the crops as payment. Only their last child, Alfred, born in 1875, was under 16 years of age when Stephen died, so Ingeborg included him in the pension application.

Stephen had his will made out before his death where he made known his wishes for his estate. His estate was left to Ingeborg with the provision that she remain single. He left each of his sons $300 and each of his daughters $100, to be paid at the time they came of age. Pension records indicate Ingeborg did give the children their inheritance as Stephen’s will indicated, but only so long as she had enough money. Further testimony in the depositions tell the story of just barely having enough money to get by on.

The last dated pension record on file for Ingeborg was 1901. The spelling change from Toreson to Thoreson was a problem for the pension department. Family records and memories indicate Ingeborg did eventually receive a $12 month pension as Stephen’s widow.

[This biography was written by historian Vickie Wendel and appears here with her permission.]

The link to his record in the SUVCW National Graves Registration Database is here. 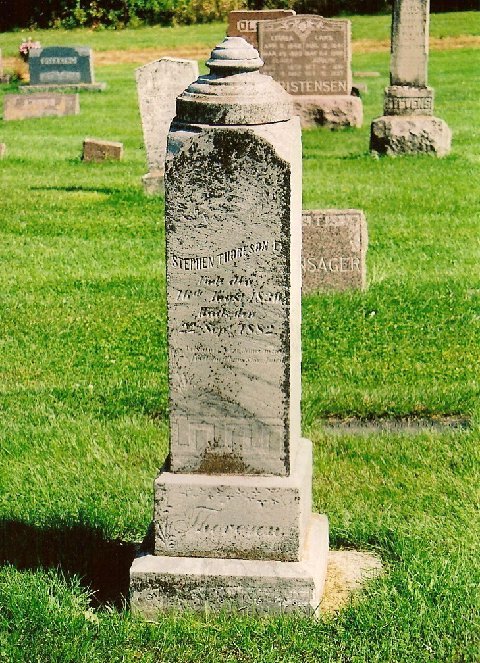 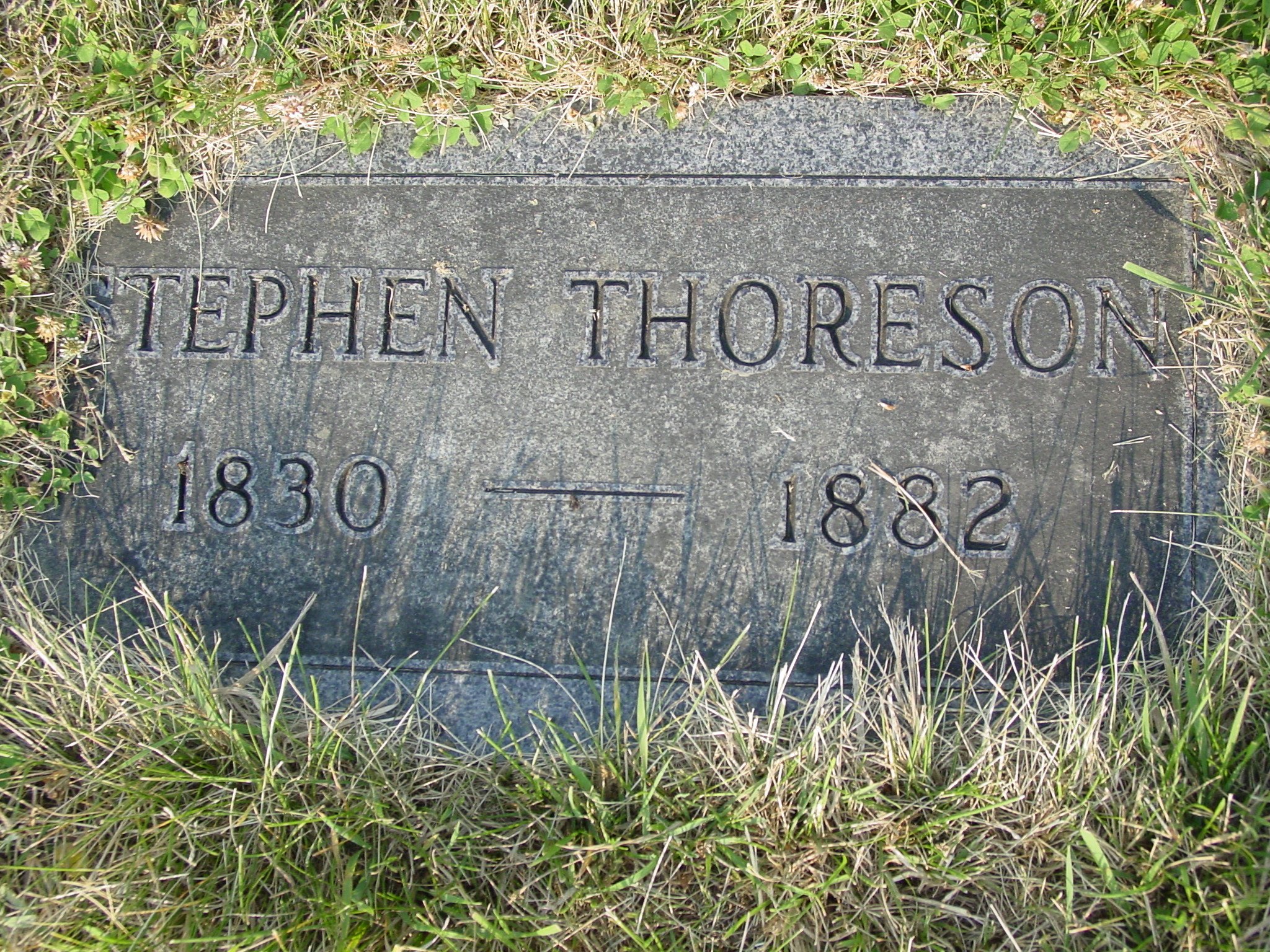