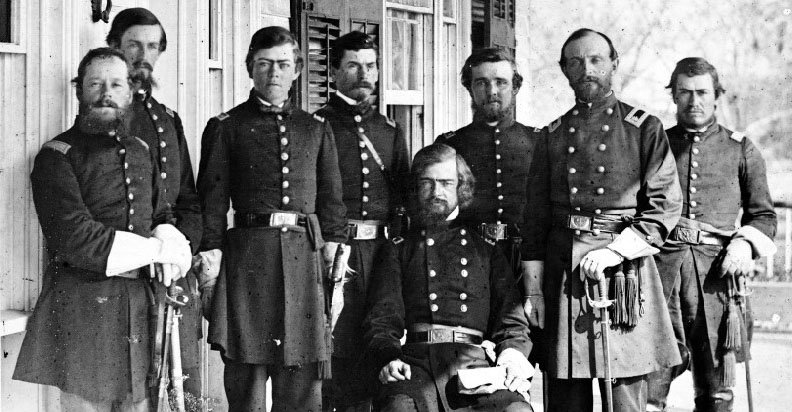 Isaac Stevens and his staff in Beaufort, South Carolina.  This is the last known photograph of Isaac Stevens, who is seated. His son Hazard Stevens is the third from the left.

Isaac Ingalls Stevens was born March 25, 1818 in North Andover, Essex County, Massachusetts.  He was the third of seven children born to Isaac and Hannah (Cummings) Stevens.  The senior Isaac Stevens was a successful farmer in Massachusetts.  A slightly built and sickly child, Stevens was very close to his mother, who died on November 3, 1827 in a carriage accident.  Two years later Stevens' father married Ann Poor, a woman the younger Stevens is said to have disliked.

Stevens worked on the family farm and in his uncle's nearby weaving mill as a youth.  At age 10 he began attending the Franklin Academy, in North Andover.  At age 15 he began studies at Phillips Academy in Andover, where he excelled at mathematics.  In July of 1835, after sixteen months at Phillips Academy, Stevens secured an appointment to the United States Military Academy at West Point, New York.  Stevens graduated from West Point in 1839, ranked first in his class of thirty-one cadets.

After graduation from West Point, Isaac Stevens was commissioned as a second lieutenant on July 1, 1839 and was appointed to the Army Corps of Engineers.  He spent the next seven years rebuilding fortifications in New England.  Stevens was promoted first lieutenant, Corps of Engineers, July 1, 1840.  He was given command of the coast survey office in Washington, D.C., serving in that role until March 1853.

Stevens served throughout the Mexican War (1846-1848) under General Winfield Scott.  He fought in the Battles of Contreras and Churubusco.  He was severely wounded in the foot in the Battle of Chapultepec, just outside of Mexico City.  Standing at just over five feet tall, Stevens was brevetted to Captain and Major for gallantry and meritorious conduct in September of 1847.

In 1853 Stevens resigned his commission in order to accept the governorship of the newly created Washington Territory.  He also secured appointment as the director of exploration for the Northern Pacific Railroad survey which he conducted in route to his post as governor.  Stevens’ tenure as governor was contentious, especially regarding the disposition of Indians and white settlements in the new territory.  In 1857 voters of the Washington Territory elected Isaac Stevens as their delegate to Congress.

In 1861, after the outbreak of the Civil War, Stevens was made Captain of the Puget Sound Rangers, a militia organized by proclamation of the Governor of Washington Territory to ensure the “readiness to meet any requisition from the President of the United States or the Governor of the Territory to aid in maintaining the laws and integrity of the National Union.”  In July of 1861, after the First Battle of Bull Run, Isaac Stevens was commissioned as a colonel in the volunteer army and placed in command of the 79th New York Infantry, known as the “Highlanders”.  Stevens replaced the regiment’s first colonel who had been killed at First Bull Run.  With the regiment on the brink of mutiny, Stevens restored order in the ranks and so won the esteem of his men that when he was promoted to Brigadier General in September of 1861 many requested transfer to his brigade.  In November 1861 General Stevens participated in the capture of Port Royal Sound, South Carolina.

In June of 1862 Stevens’ brigade suffered heavy casualties during the Union defeat at the Battle of Secessionville, the only Union attempt to capture Charleston, South Carolina, by land during the Civil War.  In July of 1862 Stevens was sent to Virginia to command the 1st Division of the IX Corps of the Army of the Potomac.  His brigade also saw action at the Second Battle of Bull Run in August of 1862.

On September 1, 1862, General Stevens’ brigade engaged the Confederates at the Battle of Chantilly in Fairfax County, Virginia.  During the battle, after seeing the colors of his old regiment fall, he grabbed the flag, shouting "Highlanders, my Highlanders, follow your general!"  Charging with his troops while carrying the banner of Saint Andrew's cross, Stevens was struck in the temple by a bullet and died instantly.  His son, Hazard Stevens, was wounded in the same battle.

On March 12, 1863, Stevens was posthumously promoted to major general to rank from July 18, 1862.  Fort Stevens in Clatsop County, Oregon was built in 1863-64 to defend the month of the Columbia River from the Confederates, British, and French.  In 1865 it was named in honor of Isaac Stevens.  He is the namesake of Stevens Post No. 1 of Seattle, King County, Washington and I. I. Stevens Post No. 51 of Woodburn, Marion County, Oregon.

Information about his grave can be found here.