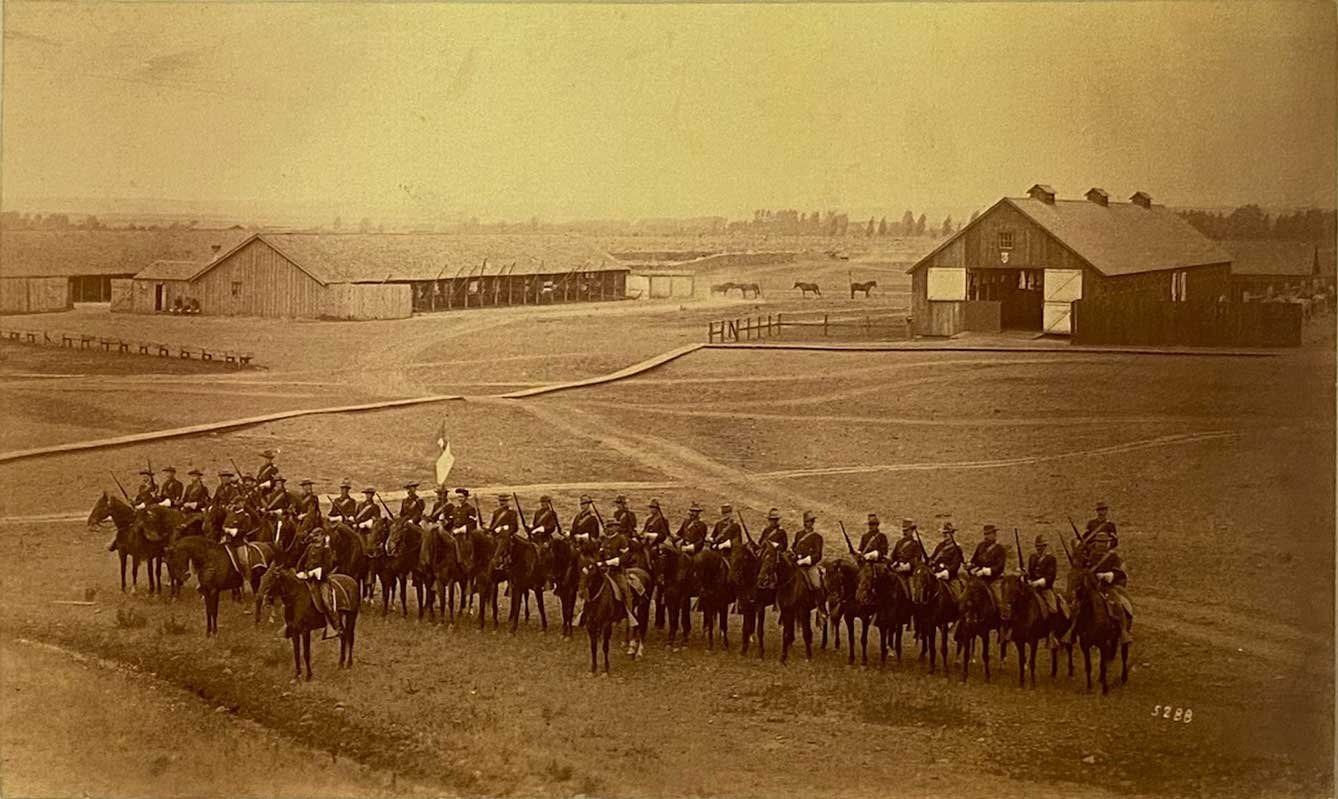 E. M. Baker Post No. 33 was based at Fort Walla Walla, Walla Walla County, WA.  The map at the bottom of the page shows the exact location.

Eugene Mortimer Baker, the namesake of the E. M. Baker Post No. 33 of Fort Walla Walla, was born in Fort Ann, Washington County, New York on July 7, 1837.  In 1859 he graduated from the United States Military Academy at West Point, New York, ranked 12th in his class of 21 cadets.  He was brevetted Second Lieutenant of the 2nd Dragoons in July 1859.  From 1860 to 1861 he served at the Cavalry School for Practice in Carlisle, Cumberland County, Pennsylvania.  Baker was promoted to First Lieutenant of the 1st Dragoons on May 7, 1861.  In November of 1861 he was assigned frontier duty with the 1st Dragoons at Fort Churchill, Nevada Territory (near present day Silver Springs, Lyon County, Nevada).

In January of 1862 Baker was promoted to Captain.  During the Civil War he served with the 1st Cavalry in defense of Washington, D.C. from January to March 1862.  He was engaged in the Siege of Yorktown and Battle of Williamsburg during the spring of 1862.  He was brevetted to major on May 4, 1862 for gallant and meritorious service at the Battle of Williamsburg.  Baker was involved in a number of other engagements throughout the war, including the Battles of Antietam and Winchester.  He was brevetted lieutenant colonel on September 19, 1864, for gallant and meritorious service at the Battle of Winchester, Virginia.  Baker served as Acting Assistant Adjutant-General of Cavalry Corps in operations in Virginia, from March to May of 1865, and at New Orleans, Louisiana from June to November 1865.

After the war Baker spent a significant amount of time engaged in frontier duty.  From 1866 through 1869 he served at Fort Dalles and at Camp Watson in Oregon.  In December of 1868 Baker was brevetted to colonel for zeal and energy while in command of troops operating against hostile Indians in 1866, 1867, and 1868.  In April 1869 he was promoted to major of the 2nd U.S. Cavalry.  Baker was hand-picked by General Phil Sheridan, late in 1869, to head a military strike force against hostile Indians in northern Montana Territory.  For reasons that remain unclear, he attacked a Piegan Indian village near the Marias River, killing most of its 200 inhabitants.  The Marias Massacre, as the attack became known, remains controversial.  Through the 1870’s, Baker continued his frontier duties serving at multiple military outposts throughout Wyoming and Montana.  Baker died December 19, 1884 while serving at Fort Walla Walla in Washington Territory.  Major Baker is buried in the Fort Walla Walla Post Cemetery.