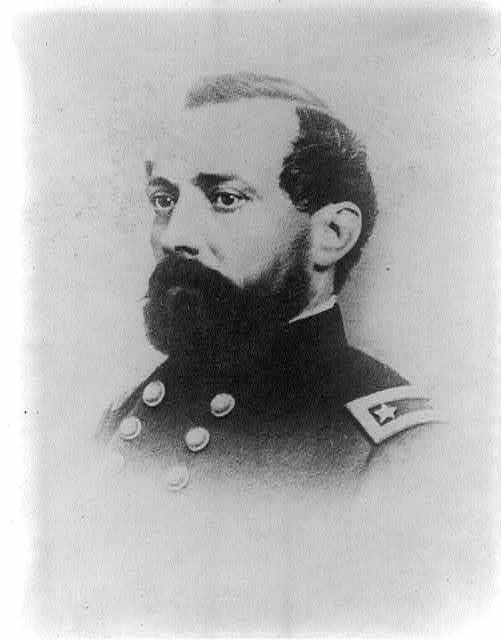 Gen. J. L. Reno Post No. 47 was based in Spokane, WA.  The map at the bottom of the page shows the exact location.

Jesse Lee Reno was born June 20, 1823 in Wheeling, Ohio County, Virginia (now West Virginia).  About 1832, his family moved to Venango County, Pennsylvania.  Reno attended the United States Military Academy at West Point, New York and graduated in 1846, 8th in a class of 59 cadets.  He served in the Mexican War and was brevetted First Lieutenant and Captain for distinguishing himself with gallant and meritorious conduct at Cerro Gordo and Chapultepec.

On November 1, 1853 he wed Mary Cross at St. John's Episcopal Church in Washington, D.C.  The couple had five children.  Prior to the Civil War, Reno served in a variety of duties including teaching mathematics at West Point, conducting government topographical surveys, and successive commands of the Mount Vernon, Alabama and Leavenworth, Kansas arsenals.

On November 12, 1861 Reno was commissioned brigadier general and commanded a brigade under Major General Ambrose Burnside in the expedition through North Carolina during the winter of 1861-1862.  In April 1862 he directed a division in the newly established Department of North Carolina.  Reno was appointed major general on August 20, to rank from July 18, 1862.  Reno’s corps saw action at the battle of Second Bull Run and at Chantilly.  Reno was known as a “soldier’s soldier” and often fought alongside his men without a sword or any sign of his rank.  On September 14, 1862 Reno was killed in action while leading his men at the Battle of South Mountain in Maryland.

After his death, Major General Jesse Lee Reno’s body was initially placed in a vault at Trinity Church in Boston, Massachusetts.  On April 8, 1867 his remains were relocated to Oak Hill Cemetery, Georgetown in Washington, D.C.

The Post was mustered in during the second half of 1888.  This Post was associated with Reno Corps No. 14, Woman's Relief Corps (WRC).