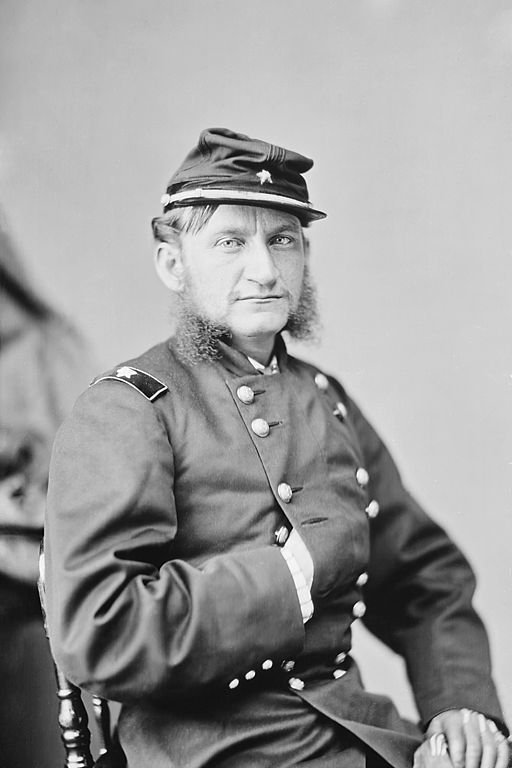 Kilpatrick Post No. 40 was based in Eugene, OR.  The map at the bottom of the page shows the exact location.

This Post was originally chartered 29 December 1881 and mustered in 20 January 1882 under the Department of California as Kilpatrick Post No. 40 with 12 charter members.  It was transferred to the Provisional Department of Oregon.  The Post number was changed to 7 by Provisional Department of Oregon General Order No. 1, issued 1 June 1882.  The change of the Post namesake to J. W. Geary was approved on 27 June 1882 and announced in General Order No. 2, issued 13 September 1882.  See here for details of the successor J. W. Geary Post.

Hugh Judson Kilpatrick was born 14 January 1836 in New Jersey.  He entered West Point in 1856, and graduated in the May class of 1861.  Realizing the path to promotion lay in the volunteer service, on 9 May 1861 he became a captain of the 5th New York Infantry.  In September 1861 he became lieutenant colonel of the 2nd New York Cavalry, colonel in December 1862, and on 14 June 1863, brigadier general of volunteers.

He served in the Army of the Potomac until April 1864, when General Grant sent him south to take charge of a cavalry division in General Sherman’s forces.  He continued with Sherman until the end of the war.  In March 1865 he was brevetted major general, U.S. Army, and major general of volunteers on 19 June 1865.

He resigned both commissions at the end of the year to accept the appointment of President Johnson as minster to Chile, serving until 1868.  In 1881 reappointed to the Chilean ministry by President Arthur.  Died in Chile on 4 December 1881, and is buried in the United States Military Academy Post Cemetery.

The Kilpatrick Post officers were elected and installed on 20 January 1882.

Note: This is not a complete cumulative roster of the Comrades (members) or Officers of this Post.  As additional Comrades are identified, they will be added.